The indigenous people of the Cape, the Khoena, did not give every river a name in the same manner as did the Europeans. There were simply rivers from which people could drink water and those from which people could not drink. The former were known as the Sweetwater rivers or Camissa rivers. A maroon group, the Goringhaicona establish the first proto-settlement at the mouth of the main Camissa river flowing from TableMountain into the sea. 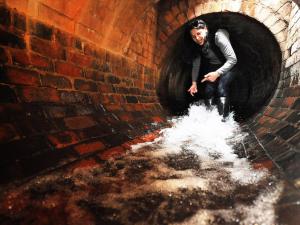 Photo link to the Cape Times article on Camissa’s wasted water. Caron von Zeil in one of the many tunnels built by the British in the late 1800s, through which millions of litres of fresh Table Mountain spring water run to waste. Picture: COURTNEY AFRICA – Cape Times

Caron von Zeil, a passionate environment champion of the Camissa water system whom I recently met has a Masters Degree in Environmental Planning and Landscape Architecture. She has established that the Camissa Sweetwater system recognised by the Khoena totalled 36 springs and 4 rivers. She has through her work uncovered 25 of the springs and 4 of the rivers hidden from sight through the many overlays of development. Like the heritage of the Camissa people, the Camissa water systems were also driven underground over the last three and a half centuries. Caron has found that in this process of being driven underground, the people of Cape Town are losing millions of litres of fresh drinking water daily.

Caron thus started an initiative 8 years ago to Reclaim Camissa but at every turn in attempting to move forward with an innovative non-profit public benefit initiative blockages have been put in her way. It would seem that the City of Cape Town local government officials are the stumbling block and it would seem that some people somewhere in the council have smelt a business opportunity and wish to now rob this non-profit initiative of their years of work. Within Caron’s story, is a story of how Reclaim Camissa established a public benefit project called FIELD OF DREAMS at the site where she had found a number of springs. This would have been an environmental site of visitation and would have produced bottled spring water branded to honour the convergence of the water heritage and Khoena heritage and for the first time elevate the Khoena name, Camissa, to its rightful place in Cape Town. The Reclaim Camissa Trust shared their plans for the project with the City Council in applying for the use of the land, but then strangely through some sort of connections another organisation which had applied much later, were handed the land for a vegetable gardening project. It was clear that this was just a holding exercise. In the meanwhile the City Council has continued to entertain Reclaim Camissa and stall their efforts while quietly following a different path to try and get a water licence from the Department of Water Affairs, large based on exploiting Caron’s and Reclaim Camissa’s intellectual work.

All organised Khoena cultural organisations are called to throw down the gauntlet and challenge the Cape Town City Council on this subterfuge.

On the one hand the City government should show due respect for these pioneering people who have worked hard, not for personal gain as a Public Benefit NGO, to reclaim the water heritage of Cape Town and to resurrect the old Khoena name Camissa.

On the other hand the original FIELD OF DREAMS project and the organised Khoena cultural movement should make common cause to ensure that there is at least one liberated zone in the City which become an unspoilt heritage site that speaks to the heritage of the Khoena in a very practical manner.

Furthermore it is important that the name Camissa and the spring-water so named becomes a protected indigene Khoena inheritance and that any proceeds remains within the non-profit public benefit arena and does not go to the greedy ‘Self-enrichment Tjommie Brigade’. The Khoena cultural role-players must make strategic alliances with organisations such as Reclaim Camissa to ensure that advances are made through practical endeavours to bring our culture that was driven underground to once more rightful take its place in the City and make an impact. Bottled spring water from the Camissa water system, has the potential not only of ensuing that millions of litres of fresh water does not go to waste but also that the story of Camissa and the original Khoena of the Cape becomes widely known to all in South Africa and to all visitors to Cape Town. Reclaim Camissa is a registered Non-profit Trust No. IT 2882/2010.

Cape Town – For eight years Caron von Zeil of Newlands has worked on Reclaim Camissa, a project that uncovered and documented the vast amount of fresh water that flows to waste underneath Cape Town.

Her work has been cutting edge: most of the springs and rivers that flow from TableMountain have been paved over and forgotten, and every day millions of litres of fresh mountain water rushes away unused into drains or sewers.

Von Zeil’s archive research showed that historically there were 36 springs in the City Bowl. She has uncovered 25 springs and four underground rivers. The City of Cape Town has only 13 springs on their records. Parliament is sitting on two springs and a huge underground reservoir.

Von Zeil’s research began as a master’s degree at UCT and developed into Reclaim Camissa, a non-profit organisation that worked on ideas to harness this underground water, and on cultural projects that could be developed.

Since 2005 she has been trying to get the city council to endorse Reclaim Camissa. Today she is no closer to this goal – although several officials and councillors say her project is “great”.

“We don’t understand it. We’ve done all this work at no charge and we’ve shared it with the city, with officials from just about every department, with councillors, and they all say it’s great, but we get nowhere,” Von Zeil said.

Her work has excited several water scientists, planners and academics.

Reclaim Camissa’s first pilot project was called Field of Springs, which was to be based on vacant council land in Oranjezicht where several springs were located. It would harness the spring water and be an outdoor water museum with natural ponds where people could see the water being cleansed. It would have an outdoor laboratory, education centre, bird hide and a bottling system where offices that used large glass water coolers could tap into the spring water.

Reclaim Camissa won first prize in the 2010 Multiplicity competition for inclusion in the city council’s winning bid for the World Design Capital and it was recognised by the Cape Town Partnership as “One of the Big Five Ideas” for the city. Premier Helen Zille awarded the Field of Springs project her 110 percent Green Flag status, which confers prestige on projects by “green pioneers”.

But for all that acclaim, the project has gone nowhere because it lacks city council endorsement.

Now the city has given the Oranjezicht land Von Zeil asked to lease for Field of Springs to another organisation, which applied after her.

“They are growing vegetables on the land. Agriculture on top of freshwater springs. That is crazy and it is illegal in terms of the National Water Act and the National Environmental Management Act.”

Von Zeil has called on councillor Garreth Bloor to rescind the lease. However, she says, the city’s property management department has told her the land has not been leased, although a vegetable garden has been established on it, with access to 4 000 litres of free water a day.

Von Zeil brought the matter to the attention of the city in March last year, but says it has not been addressed. “If there is no lease, it is tantamount to a land invasion.”

David Dewar, emeritus professor and senior research scholar in the School of Architecture and Planning at UCT, is one of the trustees of Reclaim Camissa, and has made several visits to the Civic Centre with Von Zeil to get the city council’s endorsement.

“We got pushed from one department to another. We’ve given presentations to almost every city department and they say ‘fantastic, but it’s not my department’,” Dewar said.

“We had a meeting with mayor Patricia de Lille, who made Ossie Asmal the point man to make things easier, but we’ve never heard from him. We had a meeting with councillor Garreth Bloor months ago where he promised to treat it as a matter of urgency, but nothing happened.”

The Reclaim Camissa trustees have since heard the city is planning to apply to the Department of Water Affairs for a water licence for the spring water.

“They’re seeking to make this their own,” Dewar said. The council was asked for comment on Wednesday, but had not replied by deadline on Thursday.