Remember when the adults would say “Da Bogeyman gonna come ‘n getcha!” Well it emanates from a large island in Indonesia where two of my ancestors originate; the island of SULAWEZI also known as the Celebes. One of the peoples of Sulawezi are the Buginese – the Bogey Men. 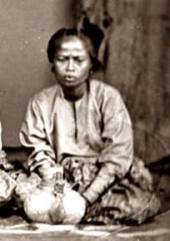 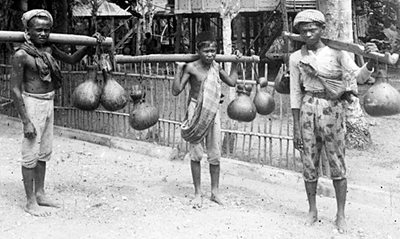 The Island has a peculiar shape with four peninsulas and with some small islands along its coastline. The major centre of Sulawezi was the town of Makassar where there was a huge slave trading market which imported 106 000 slaves and exported 155 000 slaves over 60 years from 1720 – 1780.

During the 16th and 17th centuries the Dutch fought on three fronts against the Portuguese, the Muslim Arab Sultanates and against Indigenous kingdoms. Each of these groups also battled with each other to convert people respectively to Catholicism, Protestantism and Islam. Religious converts were then turned into soldiers. The only united approach by the three imperial forces was against the old indigenous faiths and cultures which they all stomped upon.

The Dutch destroyed the Makassar Sultanate by 1669 and dominated the slave trade there for almost a century. Sulawezi has nine ethnic groups, one of which are the Bugis (Boegies) peoples. The original Bugi-man was a notorious pirate from the region. Besides the Buginese, the other ethnicities are the Makassarese, Mandar, Minhasa, Gorontala, Toraja, Butonese, Bajau, and Mongondow. It was captives from these traditional societies largely un-converted to the European Christian or Arab Muslim faiths who were sold to slavery at the Cape. (When Sheigh Yusuf of Makassar was exiled to the Cape his mission to the slaves won many of these ethnicities to Islam)

Sulawezi was a place of many wars between the Europeans and the various ethnic principalities and between the Europeans themselves. War captives and pirate captives resulted in many people being sold into slavery and a number of slaves at the Cape are recorded as ‘van Celebes’, ‘van Sulawezi’, van Makassar and ‘van Boegies’. Among these slaves were two of my 9th Great Grandparents – Mosesz van Sulawezi (1651) and Sara van Makassar (1667), both from Southern Sulawezi (aka Celebes).

The island of Sulawezi was first colonised in part by the Portuguese in 1523, then the Dutch 1623 and then also by the English. During the 16th century the Topasses (black Portuguese or Indo-Portuguese) dominated many of the islands and were also a force to be reckoned with across Southeast Asia. One of the most powerful Black-Portuguese Topasses families were the da Costas who originated from Portuguse relationships with Indian slaves. Maai Monica da Costa of Goa was the Indo-Portuguese mother of Simon van der Stel’s mother Maria Lievens.

Grandpa Mosesz and Grandma Sara were taken as slaves by force and sold through the port of Makassar as slaves destined for the Cape. The long journey to the Cape was broken by the compulsory stop at Mauritius which was the embarkation point for slaves going on to the Cape of Good Hope. My two 9th Great Grandparents would arrived at

Grandpa Mosesz was at least 15 years older than Grandma Sara, who was the second of his three wives. He also lived ten years longer than Sara. They had only one child together and that was Rebekka van der Kaap who married Otto van Graan. Sara van Makassar died in 1710 while Mosesz van Sulawezi died in 1721. During their life and until the 1780s there was quite a large Sulawezi community in Cape Town.

Over time the sands have blown over the Makassarese and Buginese cultural footprints of these our ancestors, but their spirit is still conveyed on the winds that blow from afar. Sulawezi ancestral and cultural influence are also strong among the people of Madagascar. In both the Cape and Madagascar the Sulawezi cultures and ancestry have mixed with African and other Asian countries as well as some European resulting in African-creole cultures. This also occurs strongly in Mauritius which was a stop-over port. Few among our Camissa people know and appreciate the diversity of these roots. Sulawezi has a rich a deep history and culture which at least in part is relevant to descendants today.

PICS – What Mosesz and Sara would have looked like. Old photos of traditional Sulawezi people