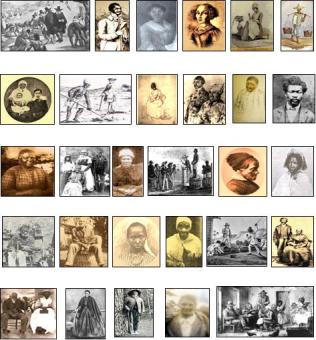 Slavery was officially abolished in 1834 at the Cape. All slaves however had to go through a 4 year apprenticeship before they could get their freedom, thus making 1838 the dawn of their freedom. But of course for a Liberated African undergoing a 14 year apprenticeship and maybe only having arrived in 1850, emancipation would be elusive for many more years. Figures are given, through the work of academics like Dr Robert Shell for the period 1653 to 1806 of 63 000 imported slaves, but these also had offspring who in turn had offspring, generation upon generation, who led lives as slaves. Chattel slavery whereby slaves were bought and sold as products, also existed side by side with a different form of slavery through de facto slavery practices meted out on Cape indigenous groups. Of those slaves forcibly brought to the Cape until 1808, plus/minus 42 150 came from Africa, Madagascar ad the Mascarenes, another 17 315 from India and Sri Lanka and, 13 545 from the Indonesian islands. After 1808 there were around 9000 more slaves brought to the Cape, and the up to 12 000 more who arrived as Liberated Africans known too as Prize Slaves. Slavery spread from the Western Cape, to the Eastern Cape and Northern Cape, and the local capture of Africans by Trek Boers in the Free State and Transvaal also led to slavery practices further afield. Around 78 000 first generation slaves at the Cape and the consecutive generations (offspring) of locally born slaves. 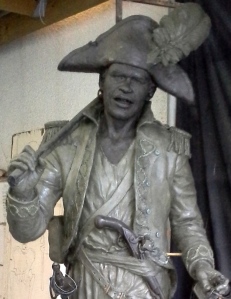 From the very beginning slaves resisted their enslavement and mistreatment. They did this by many means including running away, protest and disobedience, arson and sabotage, and by rebellion. For this they faced severe punishment, whipping, branding, torture, dismembering of body parts, crucifixions, impalement, burning at the stake, being hung, drawn and quartered. The most famous slave revolt in the Cape was led by the slave Louis of Mauritius (opposite) and involved over 300 slaves. It is known as the ‘Jij’ Rebellion. Louis, Abraham and the other revolt leaders were executed by Lord Caledon after the Dragoons put down the revolt.

Cape Slavery indelibly affected the whole of South Africa and in the Cape it was the basis for economic growth and development. The Western Cape towns and farms would never had emerged without slavery. The Indentured Labour System that succeeded Slavery was pretty much similar to slavery and relied heavily on migrant labour from Africa, China and India.

This space will be further developed.

This blog does not seek to project as an academic site or is its content academic, nor is there any claim to content being original research. The author is a heritage activist and community educator intent on bringing often hidden elements of history and heritage to a broader audience together with interpretation. The research contained herein is 70% sourced from secondary research sources, 10% from primary resource materials and 20% from community discourse. No use is made of academic notation protocols, but in keeping with educational norms there is a preferred use of a bibliography and library reference which is less cumbersome in story-telling. This is provided so that readers have recourse to original texts. As a heritage activist the author frames these offerings within an approach which seeks to provide an alternative view of history and heritage contextual to a community seeking our roots, restorative justice and wishing to restore our dignity. -